LED art in your home

James Peterson’s Los Angeles based piece Sessilanoid, used colour changing (red, green and blue) LED strip lights behind moulded forms that responded to a set of buttons that viewers could push.  The translucent sculptures were hung on the walls of the exhibit and were meant to “mimic growth patterns of a life form to abstractly represent barnacles” says Peterson.

Sessilanoid needed lighting that was technologically advanced enough to meet some tricky requirements. Peterson used LEDs because they were low voltage, didn’t get hot and were flexible and dynamic enough to work with. He believes that the advancements in LED technology are making it easier for even beginners to start experimenting with their lighting in a way they could never have imagined. “I had the luxury of using an architectural lighting component system to run through a DMX controller. It was very versatile and very intuitive and that’s part of why LED is so interesting: it’s dynamic, creates low carbon emissions, is more approachable and is becoming less tech-heavy every day”.

More and more artists have begun to use LED lights in all their forms for the expression of art.  This makes sense not only because of their energy-saving attributes, but the LED’s ability to withstand water, dust, heat; as well as their flexibility and varied sizes and connections make the LED the best option for light sources in art. 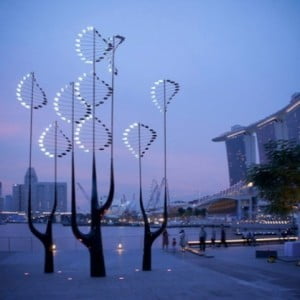 Edwin Cheong is an artist based in Singapore, with a diverse portfolio that uses all kinds of interactive LED lighting. He is responsible for the stunning 2012 Youth Olympic Games Commemorative Sculpture – a 33ft tall kinetic series of tree like structures called Breathe that harness the power of the wind to illuminate LED outdoor lights at night. 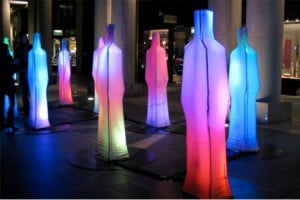 More recently, he constructed a piece called Positive Attacks that is comprised of a group of shrouded figures in darkness, until an infrared sensor sets of the LED lights and turns the scene into a colourful and lively one.  In an interview with the artist, Cheong said that he hopes the scene will “fill the viewer with doses of optimism” and that each of the figures represents a real life hero. 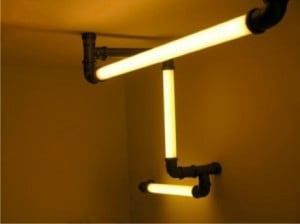 LED lights are being used, not only in expressive art and sculpture, but also as artwork within the home. A Polish design house has made functional art with LED fixtures reflecting the industrial trend in residential lighting. Emandes, has created new LED light fixtures that can attach to any number of pipe fittings (hung on walls or ceilings) in customisable arrangements that appear almost futuristic in design, resulting in an urban chic light solution for a modern home or industrial/commercial setting.

If the industrial look doesn’t suit your home or office, there are multitudes of alternatives. Another example of LED functional art designed by Emandes is a concept hanging light they have titled Swing. It is made with LED lights that shine three different colours – red green and blue – that illuminate triangular pieces of glass that can be customised by adding or removing pieces of glass, or changing the colour of the LED light to suit any mood or preference. 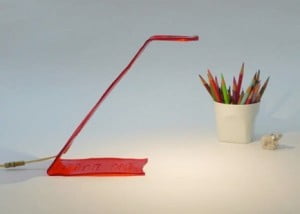 Speaking of functional art, a New York based designer has made the best of LEDs by mixing them with recycled material. He portrays meaning in the creation of day to day objects from unexpected materials. Recently he has designed two ‘sculptures’ – the first is made from an edible candy (vegetable glycerine and a type of gelatine) called Bite Me edible desk lamp.

These art works are mere examples of the boundaries LEDs are breaking, not only in display and functional art, but now in the home too! The advancement of the lighting sector’s technology has taken huge steps in the last 15 years, and now the LED’s versatility, quality and brightness are ready for the consumer to use as light sources in and around their home or workplace. The beauty of the LED light lies not only in  the ability to take on almost any form or colour, but especially in the energy efficiency that allows for a saving of up to 90% of the power used to light a home or office. Lastly, a reason this light source is moving to take the place of previous lighting solutions, is that the price is finally coming down. Homie imports directly from the supplier overseas, and so with no middle-man costs, you can light up your home in a contemporary way without damaging your pocket at the start, or during your journey to a greener and more beautiful home. 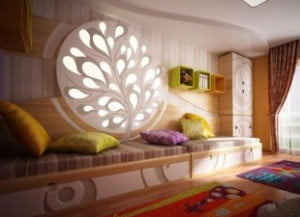 The possibilities to change the way you see and live in your home are endless with LED track lights, downlights, candle lights, bulbs or strip lights for a fraction of the cost you’d expect.